Natasa Pilides, Cyprus Deputy Minister of Shipping, has held this newly created political post for only three months, but already she has big plans to facilitate the growth of her country’s stature in world maritime circles. In Athens at Posidonia we sat with Pilides to discuss her plans for the development of Cyprus’ blue economy.

While dubbed “deputy” minister, make no mistake that Natasa Pilides is in charge, reporting directly to Nicos Anastasiades, the president of Cyprus who asked her to take on the challenge. “I was director general of the Cyprus Investment Promotion Agency – ‘Invest Cyprus’ – which is responsible for the promotion of Cyprus and to make Cyprus more business friendly,” said Pilides. “Shipping was in our mandate as one of the main sectors of focus.” After that post she become the Deputy Minister, a cabinet position to allow shipping to voice opinions and proposals directly to the president. “That’s a really positive development that is something that shipping has wanted for a very long time,” a development that was voted in unanimously. “This shows the commitment of everyone in Cyprus to the (shipping) sector. Shipping is an important sector (to the country), and (the position) was attractive to me because Cyprus is a good performer in shipping; we’re proud of the cluster that is building up and it’s a great opportunity to expand it.”

The Path Ahead
Pilides’ plate is full, as she is responsible for all matters maritime: strategy and policy for shipping sector, as well as the integrated maritime policy, and within that spatial planning for maritime “which extends beyond the scope of just shipping. The goal is to keep it as focused as possible, to have a very clear mandate and effective implementation.”
But part of the job in creating a new path is understanding exactly where you are.
“Shipping and ship management activities contributes about 7% to the economy in terms of gross domestic product (GDP), and it employs about 5,000 people in Cyprus onshore and about 55,000 seafarers, but beyond that we know the impact of maritime on the economy is actually quite a bit more, because the amazing thing about shipping in Cyprus is it is growing so quickly.”
The word in Cyprus on maritime is ‘growth,’ a collective effort led by government and including commercial and recreational sectors, as well as building the blue economy, too.
“We’re really trying to promote our ‘blue growth,’ encouraging students to take up maritime careers,” a plan which includes the recent establishment of three new maritime academies to train cadets, with first graduates coming in 2019.
“As a Deputy Ministry we monitor and approve the schools and the courses, but we also give scholarships and financial support to cadets,” said Pilides. “Beyond the three maritime academies, all of the universities – five private and three public in Cyprus – nearly all have maritime focused curriculum.”
But as anyone knows, shipping is a multifaceted endeavor with many arms, and bringing the finance to bear has also been critical to building the path toward a bigger maritime economy in Cyprus.
“What really helped is that more and more banks in Cyprus have decided to expand into shipping,” said Pilides. “All of the major banks are involved and committed, recruiting teams from abroad for training. We also have a relatively new (since 2013) package of legislation to do with investment funds. We’ve had our first shipping funds registered in Cyprus recently, and there is interest for many more. There is also plans to introduce some more legislation that will make the framework even more favorable for investment funds, and hopefully that will be another area of growth.”

The Blue Economy
While shipping and ship management are core tenants of any maritime economy, the buzzword of today is ‘Blue Economy’ as true growth counts on independent and collaborative growth among various sectors that touch maritime.
For Cyprus, ideally located in the Mediterranean Sea, a key starting point is tourism both on land and at sea, investment to attract more yacht and sailing activities.
“Cyprus is an island nation, and a lot of importance comes with tourism, seas and yachting,” said Pilides. Limassol Marina on the west side of the island became operational in 2014 and represents a large investment which helped to dramatically increase the number of yachts sailing in and around Cyprus. “We have plans for several more marinas, a lot going on that will connect the island by sea,” said Pilides. “We also have plans to create more specific spatial planning to do with fisheries, commercial activities, as well as tourist project investment. Generally there is a lot of interest in hotel renovation.”
While attracting the building of tourism and entertainment facilities to help bring in the global yachting community is one aspect, Pilides is taking a holistic look at the entire blue economy sector for her country.
“The goal is to expand the cluster in every single aspect; we’re not just looking at bringing in more ships under the Cypriot flag, we are interested in more companies expanding here, choosing Cyprus as a location for offices and headquarters. We have many companies that are currently expanding their presence here,” said Pilides. “We’re hoping to attract new companies, as well as help our current client companies expand.”
When discussing Cyprus as a location with shipping, tech and financial companies, Pilides believes Cyprus has an obvious advantage. “I think Cyprus combines many ingredients that you can find in many other places, rarely can you find them in one place like Cyprus,” said Pilides. “The human capital, the quality of people that you can find here is important. There’s a high quality of life, a cheaper cost of living and our flag is a very high quality flag.”
Location, finance and people are individually strong threads, woven together by strong government support to create the fabric that is Cyprus maritime. 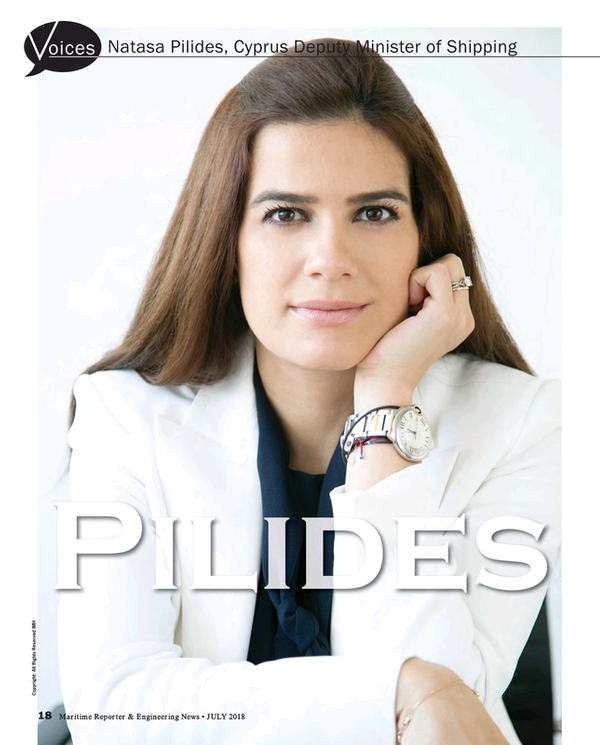