Mississippi Marine Towboat Corporation, Greenville, Miss., recently launched its first offshore supply vessel. The 112-foot by 26- foot by 11-foot 2-inch Utility-class vessel was designed by the naval architectural and marine engineering firm of van Bentem and Associates of Ocean Springs, Miss., and has been sold to Briley Marine Service, Inc. of Lafayette, La. The vessel has been named Elaine Naquin, and will operate out of the Port of Morgan City, La., according to the president of Mississippi Marine, John Nichols.

The vessel is propelled by two Detroit Diesel 12V-149 engines with Twin Disc MG- 527 reduction gears, and has two Detroit Diesel/Delco 4-71/60-kw generators, all of which were supplied by Stewart and Stevenson, Inc. of Houston, Texas. The Elaine Naquin is also equipped with a Red Fox Marine Sanitation Device.

In addition to the 112-foot vessel just launched, Mississippi Marine has under construction two 125-foot vessels which have been sold to an undisclosed interest. Mr.

Nichols, president of Mississippi Marine, also noted that steel has been purchased for two additional 125-foot vessels which are scheduled for completion in late 1978 and early 1979. Mr. Nichols also noted that these vessels are available for sale.

Mississippi Marine is one of the major inland shipyards located in Greenville on Lake Ferguson, with extensive experience in all types of marine construction, including towboats, drydocks, tank barges, deck barges, and other related marine equipment. 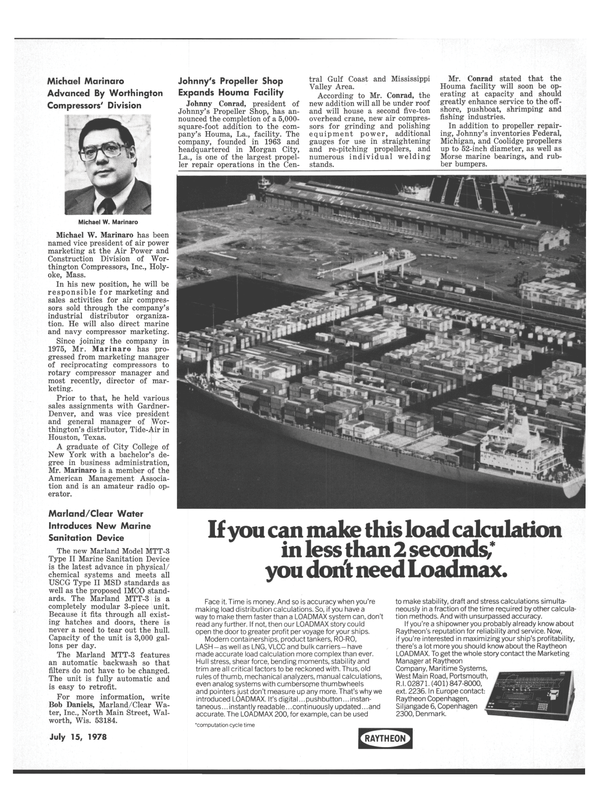