Zapata Corporation, Zapata Tower, P.O. Box 4240, Houston, Texas 77001, announced that it has consolidated all of its fishing operations under the management of a new wholly owned subsidiary, Zapata Protein, Inc. The company said that Earl J. Conrad Jr. will be president of the new Houstonbased unit.

Zapata said that the consolidation involves its menhaden, anchovy, tuna and sardine fishing and processing operations, which previously had been conducted by a number of independent subsidiaries and affiliates. The company explained that, under the new Zapata Protein organization, these f u n c t i o n s are being centralized into four divisions.

Ronald C. Lassiter, Zapata Corporation senior executive vice president, said that the company's fishing activities have grown substantially in recent years until today Zapata is one of the largest companies in the Free World's fishing industry. He said that, with the new centralized organization, management has expanded its continuity of effort in dealing with the larger scope, and broader geographical and resource diversity of its fishing businesses.

"We plan to continue to expand Zapata's participation in the fishing industry as economics warrant," Mr. Lassiter stated. "Domestically, the resources in New England, the Gulf of Mexico and the Pacific Northwest are of particular interest," he said. "Changing international jurisdictions point the way to ventures in those countries which control access to fish resources, such as Costa Rica and Mexico," he added.

Mr. Conrad, the new Zapata Protein president, comes to that company from Zapata Haynie Corporation, Zapata's menhaden fishing operation, where he has served as president since 1975. A veteran of 25 years in the industry, he has been associated with Zapata Haynie and predecessor companies since 1953.

Also joining Zapata Protein is Michael L. Patton, who will serve as vice president-finance and administration.

Previously, he held a similar post with Zapata Haynie.

Zapata Protein operations presently include a total of 58 fishing vessels, 35 spotter aircraft and seven processing plants, operating in the U.S., Canada, Mexico, and Costa Rica. In Zapata's fiscal 1977, fishing provided $86.1 million in revenues, or about 20 percent of the parent company's total sales.

Zapata Corporation began its involvement in the fishing industry in 1967, when it purchased a Louisiana menhaden fishing operation which had two processing plants and a fleet of 16 vessels.

In 1972, the size of the menhaden operation was doubled with the acquisition of a Baltimore, Md.- based firm which had two plants and 18 vessels.

The company entered the tuna fishing business in 1973, when it made the first of several separate vessel purchases. Acquisition of a Canadian tuna cannery and fleet early in 1976 provided vertical integration for the tuna operation, and gave Zapata its entry into the consumer marketplace with a substantial share of the Canadian market for canned tuna. 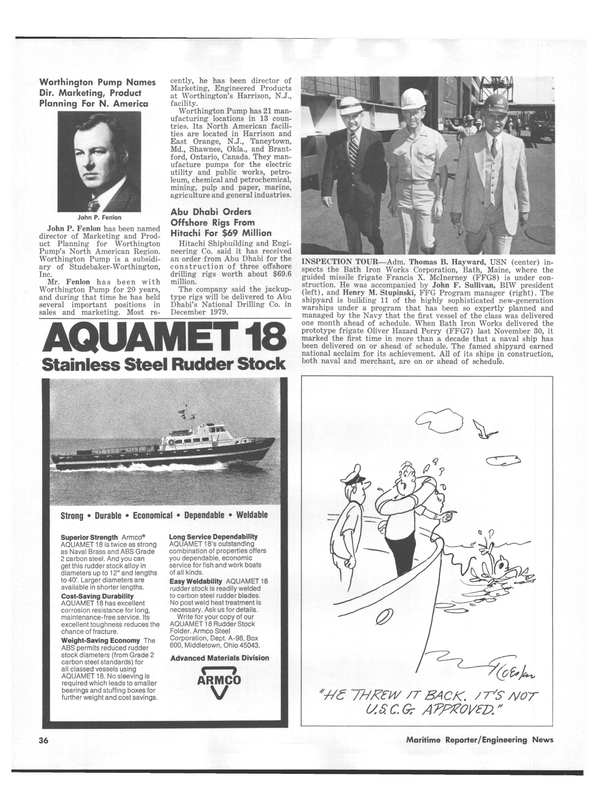