These requirements mean that the chief engineer has to operate and maintain more powerful machinery with less crew and in less time. Furthermore, the frequent crew rotations do not favor a systematic and continuous approach to these problems.

In order to obtain the availability required from the propulsion plant and economic operation, the chief engineer needs qualified information. For the every-day operation, he needs a comprehensive "picture" of the actual condition of the engines.

At the same time, he must be informed about undesirable tendencies and unfavorable conditions.

In many cases, the chief engineer is not fully aware of the engine's "history." To make the most effective use of available time and manhours, he must be informed about the future'maintenance requirements of the engine.

To provide this information to the chief engineer, a conditionmonitoring system is required.

Such a system would consist of sensors, cables, computers and other electronic components, or, in short, of a certain amount of (visible) hardware. This hardware has to perform in a reliable and accurate way for a diagnostic system to work properly.

This however, is not the typical requirement for such systems, as the above statements are equally true for any equipment onboard ships.

To meet this requirement, Sulzer has developed a diagnostic system for its diesel engines. The distinctive feature of this system, as compared to "conventional" instrumentation, is the analysis of the data obtained from the engine engine, or the capabilities of the (invisible) software.

It cannot be assumed that engines of different makes, with their different design conceptions, show the same behavior in operation.

A detection method for a particular problem which could be very effective for one type of engine might fail completely on another one. The basic principles applied are certainly very often similar, but they have to be adapted to the engine. At one end of the line, it is not sufficient to select the most appropriate sensor, but its location, which is a function of the engine design, will have a major influence. At the other end, the data analysis must be based on thorough knowledge of the engine. From this, it appears that such systems must be based on the engine-builder's know-how, experience and research.

The recognition of these facts and the conviction that such systems represent a useful and powerful tool on today's ships led Sulzer Bros, to actively investigate this field. The Sulzer diesel know-how together with the experience of the Sulzer Industrial Electronics Department in the field of computerized data systems provided Sulzer with inhouse technology for the development and production of such systems.

The system developed is called the Sulzer Engine Diagnostic System (SEDS). It is a data aquisition and analysis system based on a mini-computer. The major features are: continuous monitoring of essential engine components and functions, such as, cylinder liner and covers, combustion and injection, piston rings, and turbochargers and air coolers.

The engineers are alarmed at an early stage in case of malfunction.

A wide variety of logs can be requested, informing the engineers about all essential parameters.

This first task of SEDS assists the engineers in their every-day work to maintain a 100 percent availability of the propulsion unit.

Further, a log of future maintenance requirements of essential components is printed on request.

The system automatically informs about trend deviations and warns about overhaul due in the near future. In this respect, SEDS allows for efficient planning of maintenance in function of the actual condition of the components.

A new chief engineer is immediately informed so that a systematic approach to maintenance is obtained.

The sensors and electronics are continuously controlled—doubtful readings are automatically disregarded.

The system warns the operator about anomalies. A selfdiagnosis program detects the defective print which has to be replaced; this task can be carried out by the crew without any particular training. A large majority of SEDS components can be maintained by replacement as indicated by the computer. These jobs do not require any knowledge of electronics.

The printer presents all messages, logs, etc. in clear language, without shorts or coding. The operating console allows for simple pushbutton control. To operate SEDS requires neither computer nor computer language knowledge.

The central processing unit is a mini-computer type produced by the Digital Equipment Corporation.

The analogue cabling of a shipborne data system presents some particular problems, namely, the cables have to be shielded to avoid electrical interference, they have to be protected against mechanical damage, and they should not interfere with the crew's every-day work and overhauls.

SEDS' answer to the cabling problem is a system of prefabricated steel cable ducts. A particular cable duct has been designed for the cylinder liners, the turbochargers and charge-air coolers, the combustion and injection pressure sensors. The sensors, delivered with a short length of flexible cable and a plug, are simply plugged into tbe ducts. The multi-core cable links between the ducts and the subsystems are protected by steel pipes.

The software package provides for continuous monitoring. The parameters, measured or calculated, are continuously compared to fault detection algorithms. The engineers are warned at an early stage about malfunctions and undesirable tendencies. Parameters not accessible to conventional instrumentation are computed, monitored and can be displayed. Data logs provide a full and instantaneous picture of the engine.

Parameters relevant for the long-term development of the engine's condition (wear and dirt) are recorded. The influence of environmental parameters (temperature, load, etc.) are ruled out by normalizing the data on the basis of standard conditions. The data are registered to form the components history. An extrapolation provides information relevant for future overhaul.

Trend logs, indicating the time delay to the next overhaul, and normalized data logs can be obtained at any time. The computer automatically informs the crew if a component reaches a preset "warning time limit" before overhaul becomes necessary.

The remedy for dubious sensors is their replacement. The self-diagnostic program HELP is the remedy for electronic failures.

This cassette-resident program is read in, and, by a question and answer procedure, detects the defective printed circuit board, which can be easily replaced.

The operation of HELP requires no computer knowledge and no training. Any engineer is capable to carry out the necessary procedures. Maintenance of SEDS is thus reduced in fnost cases to the replacement of a printed board.

The modular design of SEDS hardware makes the adaptations to an owner's particular requirements easy. Additional sensors (for example on essential auxiliary machinery) can be simply included. The inherent flexibility of the software and the structure aoplied to SEDS allow for additional programs to control such additional sensors and to analyze the readings, in accordance with the owner's requests.

The prototype SEDS system is installed on the French cargo liner MS Ville de Strasbourg, cowered by a CCM-Sulzer 6 RND 90 main engine. This vessel, and SEDS with it, has been operational since July 1975. The system, constantly kept in service, has been operational for about 18,000 hours by the end of 1977.

Due to the vessel's particular schedule (Arabian Gulf), the main engine has only been in service for about 8,500 hours.

By the end of 1977, four SEDS, to be installed on 8 RNF 90 M engines, were in the course of delivery and erection.

The measuring accuracy and stability of the SEDS was confirmed on the prototype unit. All sensors' accuracies have remained within the original tolerances — no drift adjustment, neither for sensors, nor for the electronics, has been required. After a few "teething troubles," no difficulties were, encountered with the electronics.

The system's control by the console did prove simple and easy to learn.

A few problems had to be solved in the software. It is considered that these problems have been gradually solved. 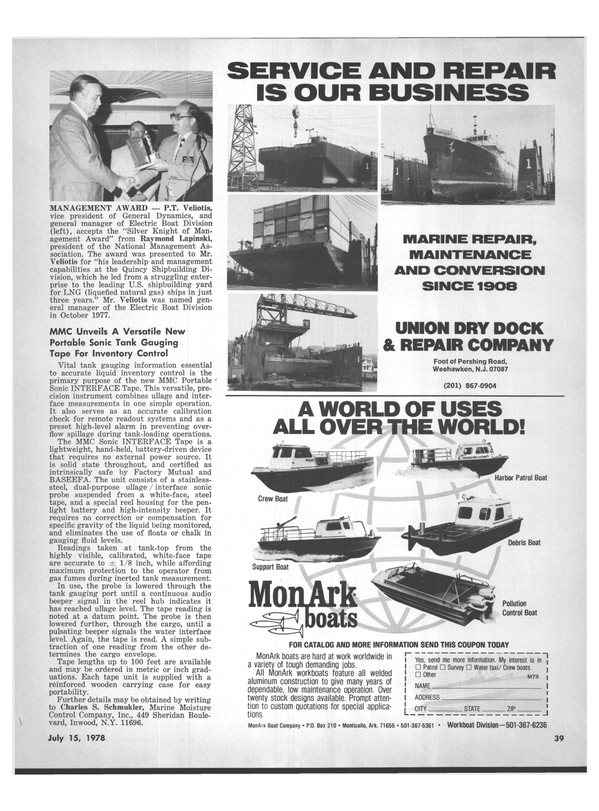