Blount Marine Corporation of Warren, R.I., has announced the delivery of the Munnatawket, a passenger/vehicle ferry designed and built for the Fisher's Island Ferry District.

The Ferry District is an authority of the State of New York, administrated by an elected Board of Commissioners. Raymond F.

Doyen, chairman of the District, accepted the vessel at ceremonies held at Fisher's Island. Officials of the Town of Southhold, L.I., spoke at the ceremonies attended by most of the Island's residents.

While the winter population is rather small, the Island, formerly the site of Fort Wright, boasts an extensive summer colony.

The Munnatawket's name was chosen by Islanders since it is the name Indians gave the Island lying at the entrance to Long Island Sound.

The Munnatawket is powered by two General Motors 12V71N diesels, and attained a speed of 12 knots on trials. For extra maneuverability at congested terminals, it is equipped with a Blountdesigned Orbitrol Hydraulic Steering System and a Marco Hydraulic-powered Bow Thruster, with power furnished by a General Motors 4-71 diesel located in the engine room.

The 132-foot by 33-foot by 8-foot vessel was built under United States Coast Guard supervision, and is certified to carry 210 passengers and 44 tons of vehicles and freight (3 trucks and 17 cars). During the construction of the vessel, G. Gilbert Wyland of Sparkman & Stevens, Incorporated, acted as owner's representative.

The Munnatawket is the sixth vessel of this class designed and built by Blount, and will join the Blount-built Olinda on the 7-mile run between New London, Conn., and the Island. 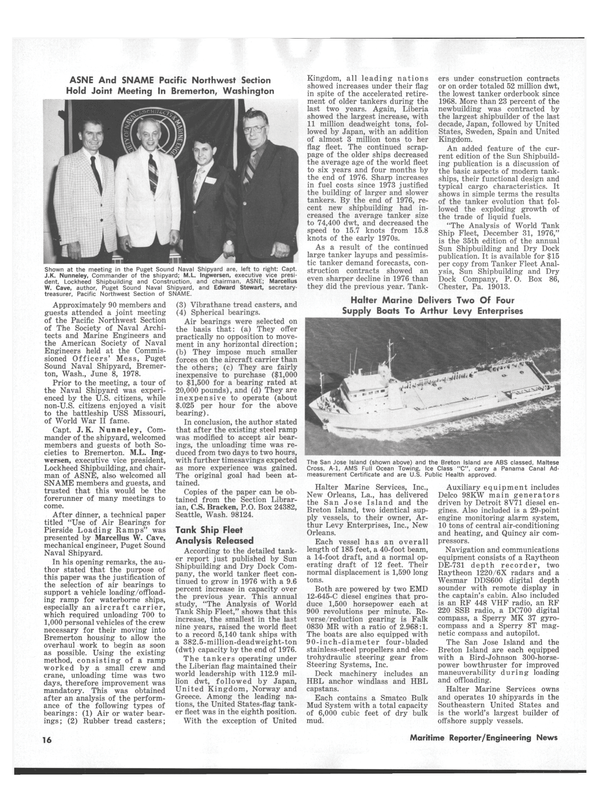