Bird-Johnson Company, Walpole, Mass., has been awarded a contract for a 990-hp bow thruster by AmShip Division of The American Ship Building Company. The unit will be installed as a replacement on the S/S Elton Hoyt 2nd. The Hoyt, a Great Lakes bulk freighter capable of carrying 23,200 gross tons of iron ore pellets, will also be converted to a self-unloader at AmShip's Toledo, Ohio, yard this winter.

The thruster is driven by a Caterpillar D398 turbocharged engine and will deliver approximately 24,000 pounds of thrust at full horsepower. Equipped with stainlesssteel controllable-pitch propeller blades, the unit can adjust pitch from maximum port to starboard in about 12 seconds, while the prime mover runs at a constant speed in one direction only. This is accomplished by moving a single lever at the bridge control station.

The positioning of this lever also simultaneously regulates the amount of thrust delivered during all maneuvers. These features enhance the vessel's operating efficiency, provide improved heading control at low speeds and will limit tug assistance requirements.

The Hoyt conversion is part of a $70- million expansion program announced by Pickands Mather & Co. for the Interlake Steamship fleet. A new self-unloading bulk freighter, capable of carrying over 60,000 gross tons, is also included in this program.

Bird-Johnson Company will provide twinscrew controllable-pitch propellers and a 1,500-hp thruster for this vessel. She is scheduled for delivery in 1980 by AmShip's Lorain, Ohio, yard. 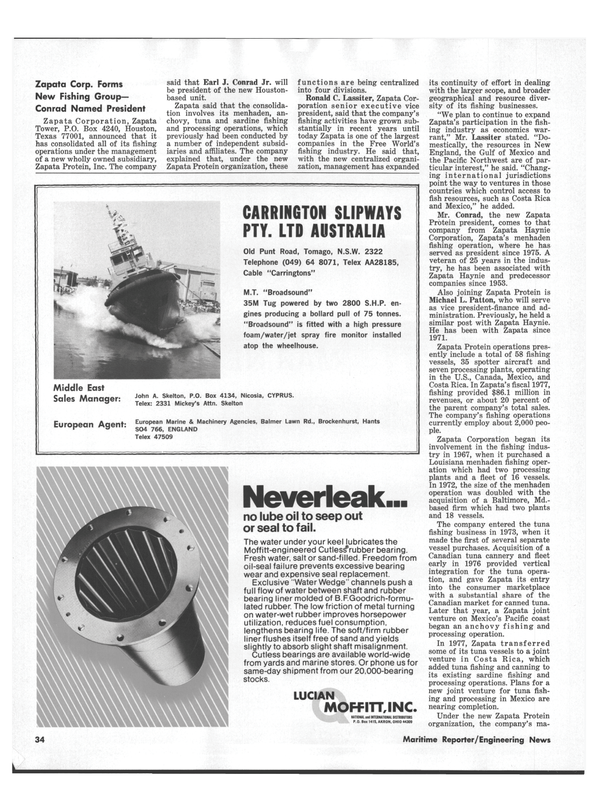