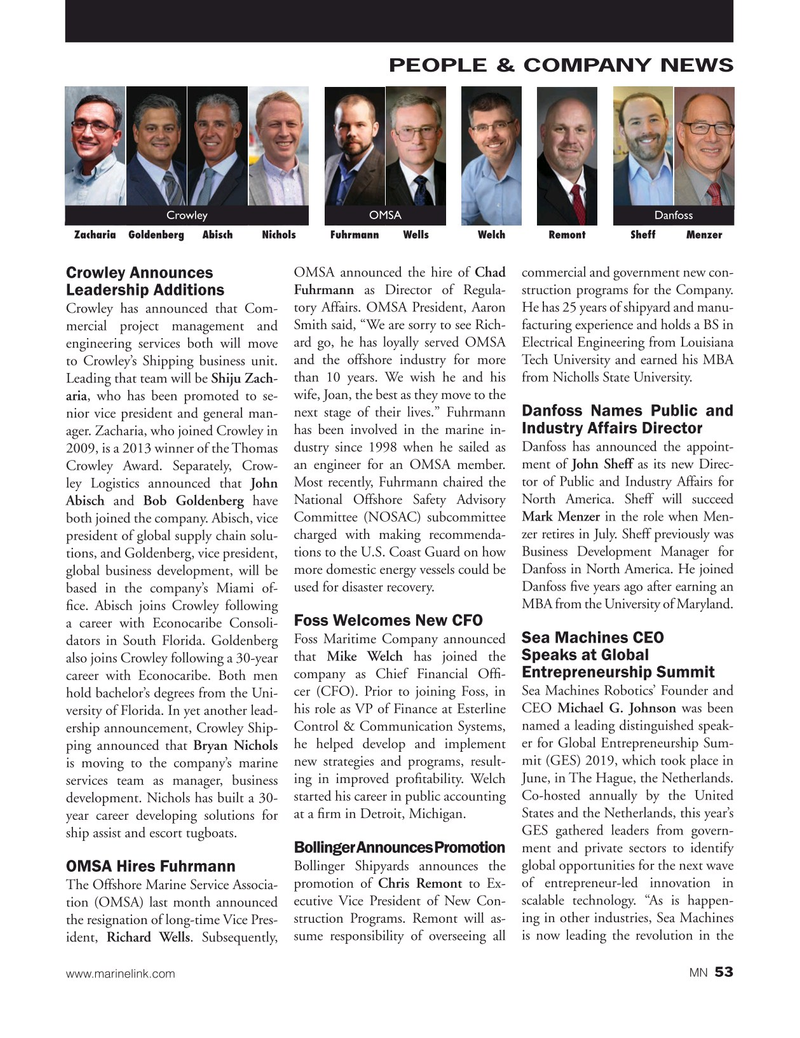 Fuhrmann as Director of Regula- struction programs for the Company.

Crowley has announced that Com- tory Affairs. OMSA President, Aaron He has 25 years of shipyard and manu- mercial project management and Smith said, “We are sorry to see Rich- facturing experience and holds a BS in engineering services both will move ard go, he has loyally served OMSA Electrical Engineering from Louisiana to Crowley’s Shipping business unit. and the offshore industry for more Tech University and earned his MBA

Leading that team will be Shiju Zach- than 10 years. We wish he and his from Nicholls State University. aria, who has been promoted to se- wife, Joan, the best as they move to the

Danfoss Names Public and nior vice president and general man- next stage of their lives.” Fuhrmann

Industry Affairs Director ager. Zacharia, who joined Crowley in has been involved in the marine in- 2009, is a 2013 winner of the Thomas dustry since 1998 when he sailed as Danfoss has announced the appoint- an engineer for an OMSA member. ment of John Sheff as its new Direc-

Abisch and Bob Goldenberg have National Offshore Safety Advisory North America. Sheff will succeed both joined the company. Abisch, vice Committee (NOSAC) subcommittee Mark Menzer in the role when Men- president of global supply chain solu- charged with making recommenda- zer retires in July. Sheff previously was tions, and Goldenberg, vice president, tions to the U.S. Coast Guard on how Business Development Manager for global business development, will be more domestic energy vessels could be Danfoss in North America. He joined based in the company’s Miami of- used for disaster recovery. Danfoss ? ve years ago after earning an

Entrepreneurship Summit career with Econocaribe. Both men company as Chief Financial Of? - cer (CFO). Prior to joining Foss, in Sea Machines Robotics’ Founder and hold bachelor’s degrees from the Uni- his role as VP of Finance at Esterline CEO Michael G. Johnson was been versity of Florida. In yet another lead-

Control & Communication Systems, named a leading distinguished speak- ership announcement, Crowley Ship- ping announced that Bryan Nichols he helped develop and implement er for Global Entrepreneurship Sum- is moving to the company’s marine new strategies and programs, result- mit (GES) 2019, which took place in services team as manager, business ing in improved pro? tability. Welch June, in The Hague, the Netherlands. started his career in public accounting Co-hosted annually by the United development. Nichols has built a 30- year career developing solutions for at a ? rm in Detroit, Michigan. States and the Netherlands, this year’s GES gathered leaders from govern- ship assist and escort tugboats. ment and private sectors to identify

Bollinger Shipyards announces the global opportunities for the next wave

The Offshore Marine Service Associa- promotion of Chris Remont to Ex- of entrepreneur-led innovation in tion (OMSA) last month announced ecutive Vice President of New Con- scalable technology. “As is happen- the resignation of long-time Vice Pres- struction Programs. Remont will as- ing in other industries, Sea Machines ident, Richard Wells. Subsequently, sume responsibility of overseeing all is now leading the revolution in the 53 www.marinelink.com MN