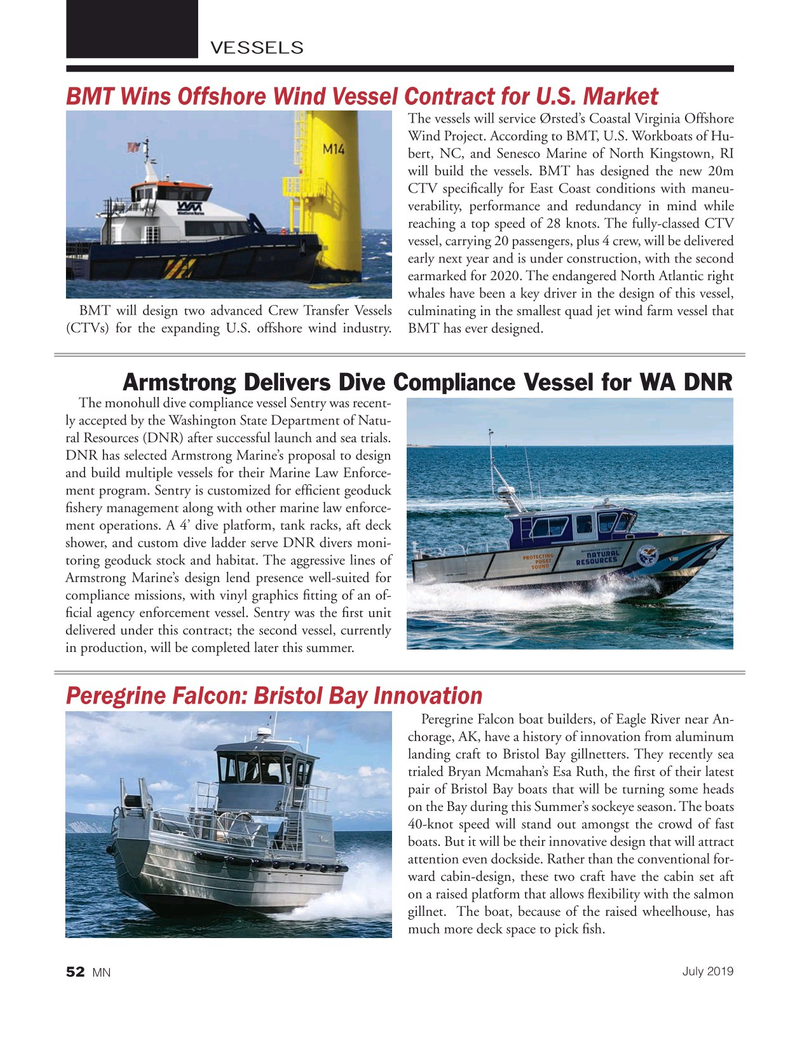 Wind Project. According to BMT, U.S. Workboats of Hu- bert, NC, and Senesco Marine of North Kingstown, RI will build the vessels. BMT has designed the new 20m

CTV speci? cally for East Coast conditions with maneu- verability, performance and redundancy in mind while reaching a top speed of 28 knots. The fully-classed CTV vessel, carrying 20 passengers, plus 4 crew, will be delivered early next year and is under construction, with the second earmarked for 2020. The endangered North Atlantic right whales have been a key driver in the design of this vessel,

Armstrong Marine’s design lend presence well-suited for compliance missions, with vinyl graphics ? tting of an of- ? cial agency enforcement vessel. Sentry was the ? rst unit delivered under this contract; the second vessel, currently in production, will be completed later this summer.

Peregrine Falcon boat builders, of Eagle River near An- chorage, AK, have a history of innovation from aluminum landing craft to Bristol Bay gillnetters. They recently sea trialed Bryan Mcmahan’s Esa Ruth, the ? rst of their latest pair of Bristol Bay boats that will be turning some heads on the Bay during this Summer’s sockeye season. The boats 40-knot speed will stand out amongst the crowd of fast boats. But it will be their innovative design that will attract attention even dockside. Rather than the conventional for- ward cabin-design, these two craft have the cabin set aft on a raised platform that allows ? exibility with the salmon gillnet. The boat, because of the raised wheelhouse, has much more deck space to pick ? sh.