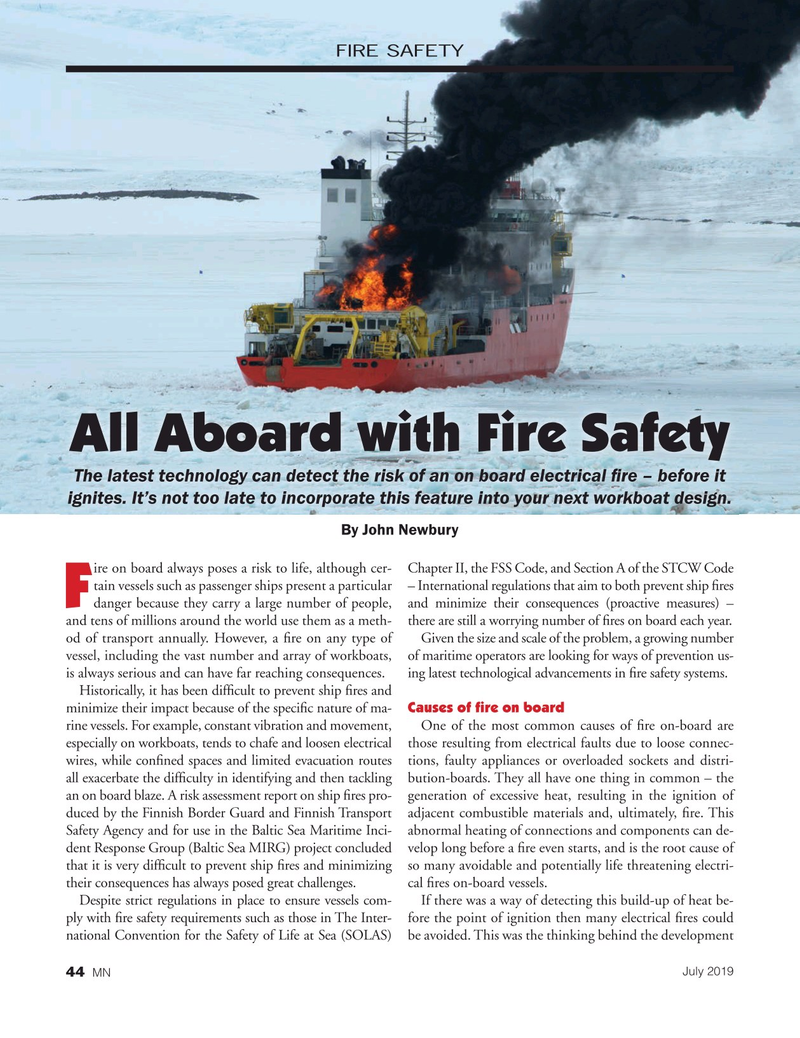 All Aboard with Fire Safety

The latest technology can detect the risk of an on board electrical ? re – before it ignites. It’s not too late to incorporate this feature into your next workboat design.

By John Newbury ire on board always poses a risk to life, although cer- Chapter II, the FSS Code, and Section A of the STCW Code tain vessels such as passenger ships present a particular – International regulations that aim to both prevent ship ? res

F danger because they carry a large number of people, and minimize their consequences (proactive measures) – and tens of millions around the world use them as a meth- there are still a worrying number of ? res on board each year. od of transport annually. However, a ? re on any type of Given the size and scale of the problem, a growing number vessel, including the vast number and array of workboats, of maritime operators are looking for ways of prevention us- is always serious and can have far reaching consequences. ing latest technological advancements in ? re safety systems.

Historically, it has been dif? cult to prevent ship ? res and minimize their impact because of the speci? c nature of ma- Causes of fire on board rine vessels. For example, constant vibration and movement, One of the most common causes of ? re on-board are especially on workboats, tends to chafe and loosen electrical those resulting from electrical faults due to loose connec- wires, while con? ned spaces and limited evacuation routes tions, faulty appliances or overloaded sockets and distri- all exacerbate the dif? culty in identifying and then tackling bution-boards. They all have one thing in common – the an on board blaze. A risk assessment report on ship ? res pro- generation of excessive heat, resulting in the ignition of duced by the Finnish Border Guard and Finnish Transport adjacent combustible materials and, ultimately, ? re. This

Safety Agency and for use in the Baltic Sea Maritime Inci- abnormal heating of connections and components can de- dent Response Group (Baltic Sea MIRG) project concluded velop long before a ? re even starts, and is the root cause of that it is very dif? cult to prevent ship ? res and minimizing so many avoidable and potentially life threatening electri- their consequences has always posed great challenges. cal ? res on-board vessels.

Despite strict regulations in place to ensure vessels com- If there was a way of detecting this build-up of heat be- ply with ? re safety requirements such as those in The Inter- fore the point of ignition then many electrical ? res could national Convention for the Safety of Life at Sea (SOLAS) be avoided. This was the thinking behind the development