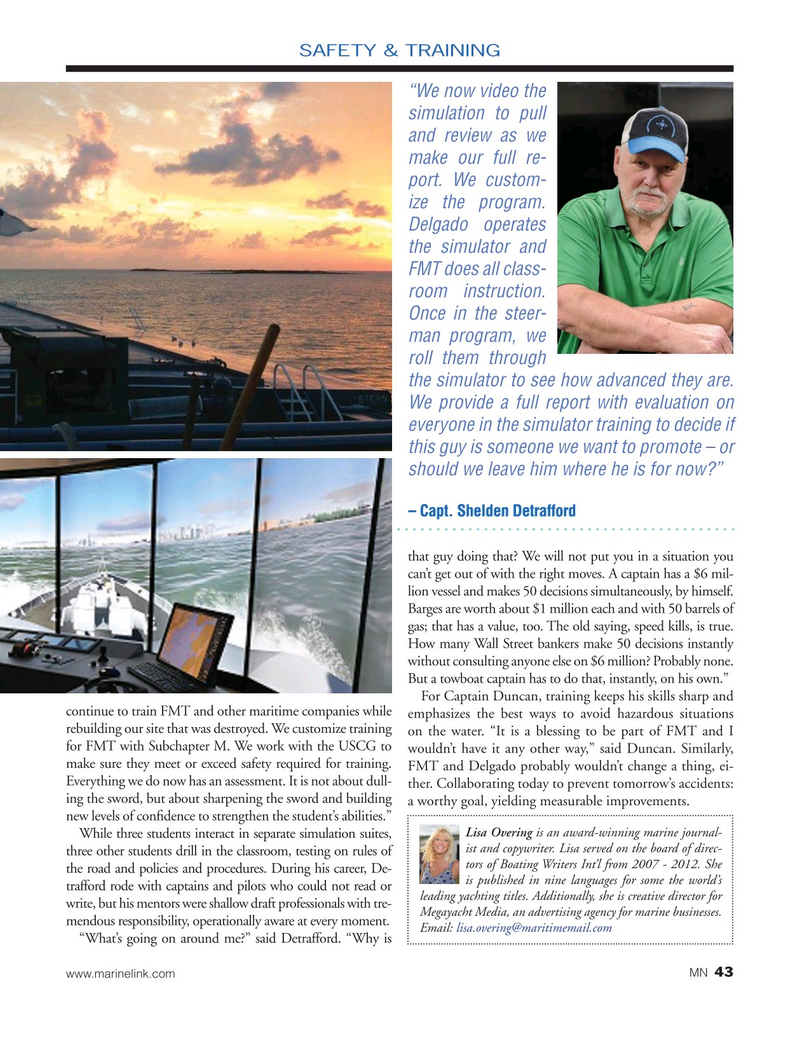 SAFETY & TRAINING “We now video the simulation to pull and review as we make our full re- port. We custom- ize the program.

Delgado operates the simulator and

FMT does all class- room instruction.

Once in the steer- man program, we roll them through the simulator to see how advanced they are.

We provide a full report with evaluation on everyone in the simulator training to decide if this guy is someone we want to promote – or should we leave him where he is for now?” – Capt. Shelden Detrafford– Capt. Shelden Detrafford that guy doing that? We will not put you in a situation you can’t get out of with the right moves. A captain has a $6 mil- lion vessel and makes 50 decisions simultaneously, by himself.

Barges are worth about $1 million each and with 50 barrels of gas; that has a value, too. The old saying, speed kills, is true.

How many Wall Street bankers make 50 decisions instantly without consulting anyone else on $6 million? Probably none.

But a towboat captain has to do that, instantly, on his own.”

For Captain Duncan, training keeps his skills sharp and continue to train FMT and other maritime companies while emphasizes the best ways to avoid hazardous situations rebuilding our site that was destroyed. We customize training on the water. “It is a blessing to be part of FMT and I for FMT with Subchapter M. We work with the USCG to wouldn’t have it any other way,” said Duncan. Similarly, make sure they meet or exceed safety required for training. FMT and Delgado probably wouldn’t change a thing, ei-

Everything we do now has an assessment. It is not about dull- ther. Collaborating today to prevent tomorrow’s accidents: ing the sword, but about sharpening the sword and building a worthy goal, yielding measurable improvements. new levels of con? dence to strengthen the student’s abilities.”

While three students interact in separate simulation suites, ist and copywriter. Lisa served on the board of direc- three other students drill in the classroom, testing on rules of tors of Boating Writers Int’l from 2007 - 2012. She the road and policies and procedures. During his career, De- is published in nine languages for some the world’s trafford rode with captains and pilots who could not read or leading yachting titles. Additionally, she is creative director for write, but his mentors were shallow draft professionals with tre-