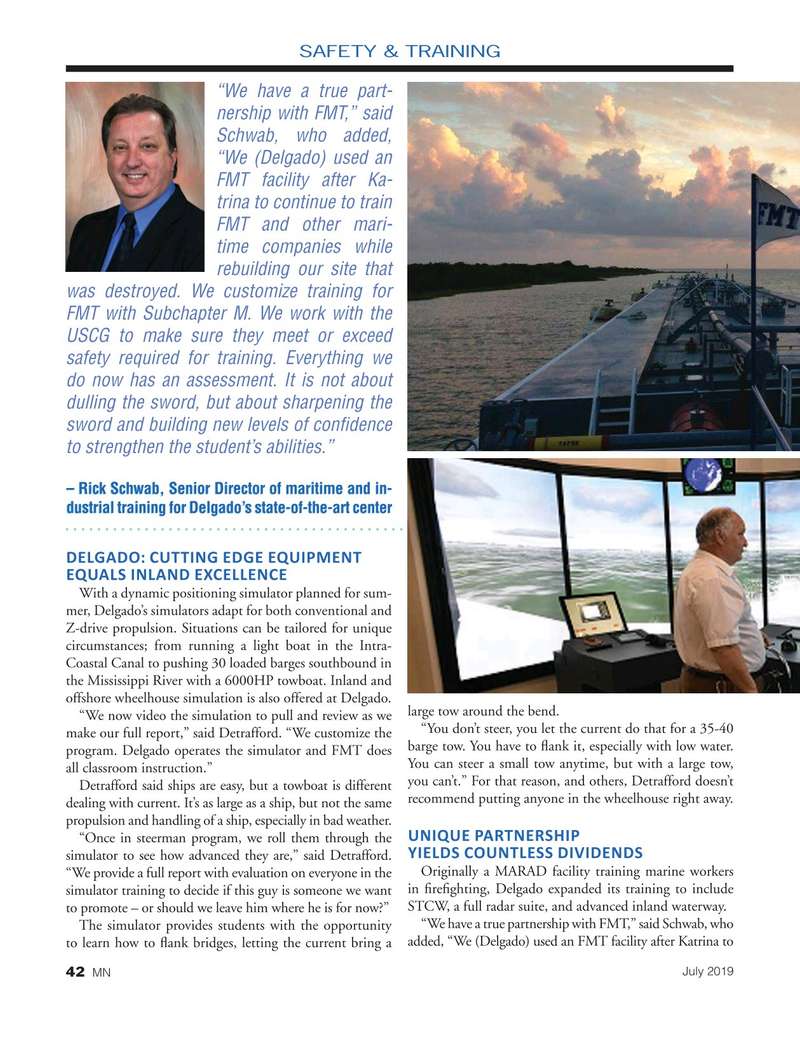 SAFETY & TRAINING “We have a true part- nership with FMT,” said

Schwab, who added, “We (Delgado) used an

FMT facility after Ka- trina to continue to train

FMT and other mari- time companies while rebuilding our site that was destroyed. We customize training for

FMT with Subchapter M. We work with the

With a dynamic positioning simulator planned for sum- mer, Delgado’s simulators adapt for both conventional and

Z-drive propulsion. Situations can be tailored for unique circumstances; from running a light boat in the Intra-

Coastal Canal to pushing 30 loaded barges southbound in the Mississippi River with a 6000HP towboat. Inland and offshore wheelhouse simulation is also offered at Delgado.

“We now video the simulation to pull and review as we large tow around the bend.

“You don’t steer, you let the current do that for a 35-40 make our full report,” said Detrafford. “We customize the program. Delgado operates the simulator and FMT does barge tow. You have to ? ank it, especially with low water.

You can steer a small tow anytime, but with a large tow, all classroom instruction.”

Detrafford said ships are easy, but a towboat is different you can’t.” For that reason, and others, Detrafford doesn’t dealing with current. It’s as large as a ship, but not the same recommend putting anyone in the wheelhouse right away.

propulsion and handling of a ship, especially in bad weather.

UNIQUE PARTNERSHIP “Once in steerman program, we roll them through the

YIELDS COUNTLESS DIVIDENDS simulator to see how advanced they are,” said Detrafford.

Originally a MARAD facility training marine workers “We provide a full report with evaluation on everyone in the simulator training to decide if this guy is someone we want in ? re? ghting, Delgado expanded its training to include

STCW, a full radar suite, and advanced inland waterway. to promote – or should we leave him where he is for now?” “We have a true partnership with FMT,” said Schwab, who

The simulator provides students with the opportunity to learn how to ? ank bridges, letting the current bring a added, “We (Delgado) used an FMT facility after Katrina to