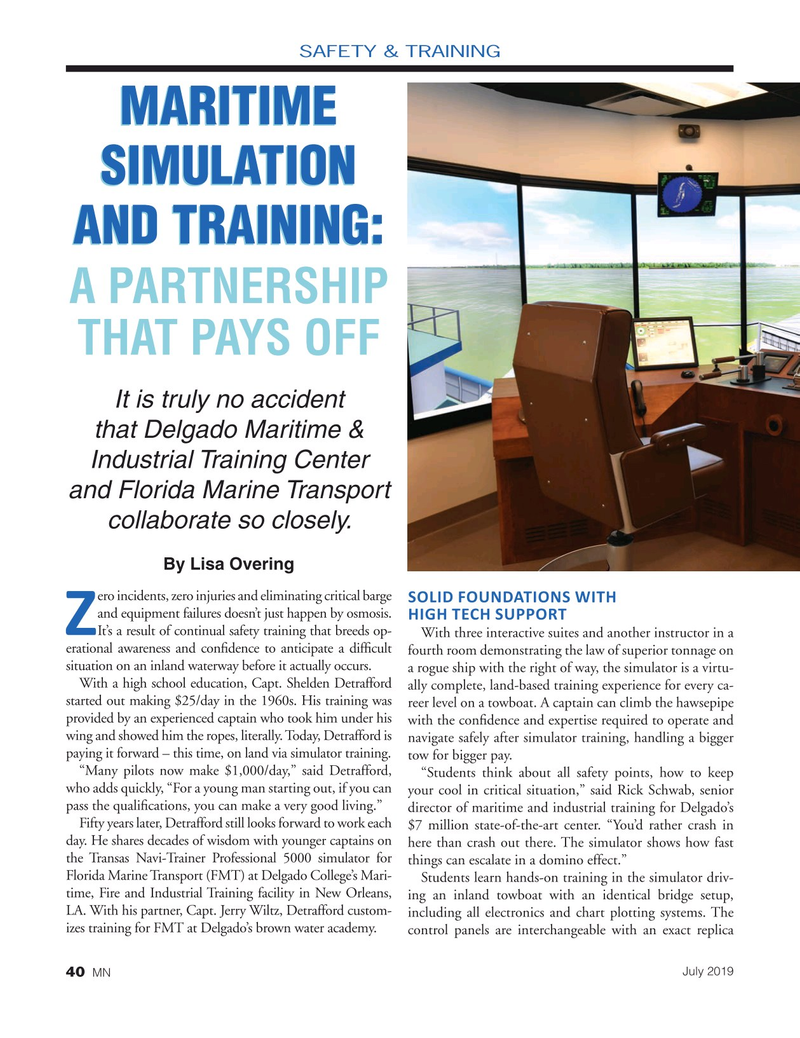 It is truly no accident that Delgado Maritime &

It’s a result of continual safety training that breeds op-

With three interactive suites and another instructor in a erational awareness and con? dence to anticipate a dif? cult fourth room demonstrating the law of superior tonnage on situation on an inland waterway before it actually occurs.

a rogue ship with the right of way, the simulator is a virtu-

With a high school education, Capt. Shelden Detrafford ally complete, land-based training experience for every ca- started out making $25/day in the 1960s. His training was reer level on a towboat. A captain can climb the hawsepipe provided by an experienced captain who took him under his with the con? dence and expertise required to operate and wing and showed him the ropes, literally. Today, Detrafford is navigate safely after simulator training, handling a bigger paying it forward – this time, on land via simulator training.

“Many pilots now make $1,000/day,” said Detrafford, “Students think about all safety points, how to keep who adds quickly, “For a young man starting out, if you can your cool in critical situation,” said Rick Schwab, senior pass the quali? cations, you can make a very good living.” director of maritime and industrial training for Delgado’s

Fifty years later, Detrafford still looks forward to work each $7 million state-of-the-art center. “You’d rather crash in day. He shares decades of wisdom with younger captains on here than crash out there. The simulator shows how fast the Transas Navi-Trainer Professional 5000 simulator for things can escalate in a domino effect.”

LA. With his partner, Capt. Jerry Wiltz, Detrafford custom- including all electronics and chart plotting systems. The izes training for FMT at Delgado’s brown water academy.

control panels are interchangeable with an exact replica