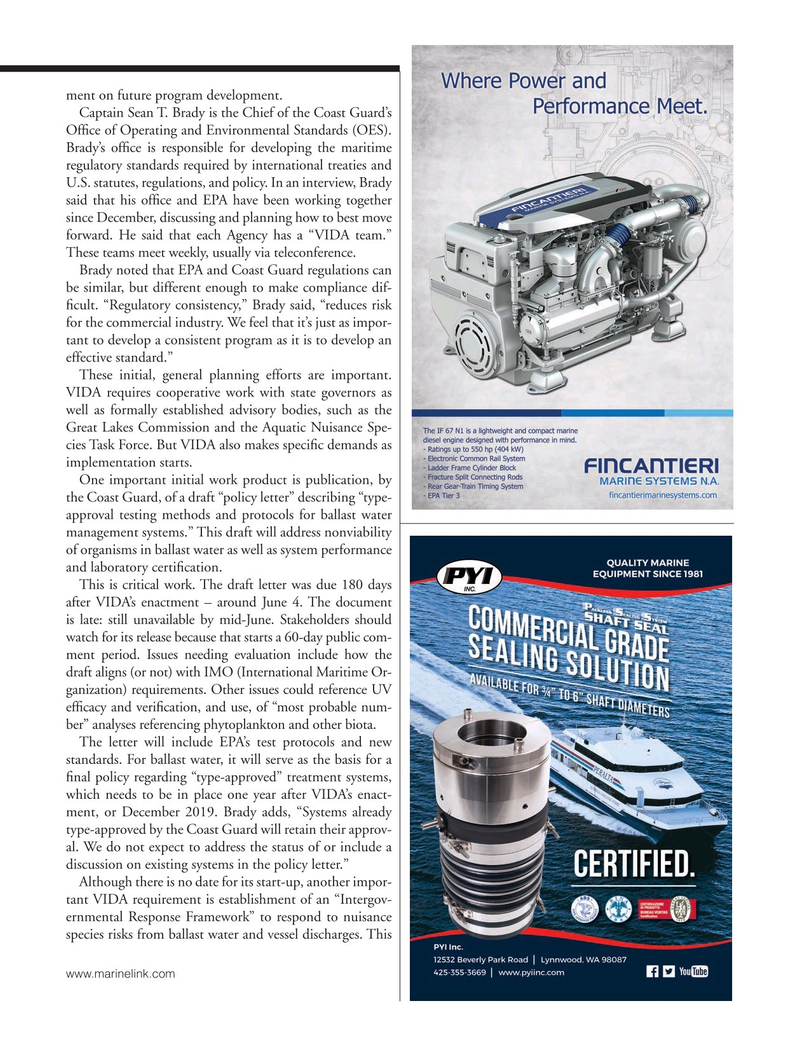 Captain Sean T. Brady is the Chief of the Coast Guard’s

Of? ce of Operating and Environmental Standards (OES).

Brady’s of? ce is responsible for developing the maritime regulatory standards required by international treaties and

U.S. statutes, regulations, and policy. In an interview, Brady said that his of? ce and EPA have been working together since December, discussing and planning how to best move forward. He said that each Agency has a “VIDA team.”

Brady noted that EPA and Coast Guard regulations can be similar, but different enough to make compliance dif- ? cult. “Regulatory consistency,” Brady said, “reduces risk for the commercial industry. We feel that it’s just as impor- tant to develop a consistent program as it is to develop an effective standard.”

VIDA requires cooperative work with state governors as well as formally established advisory bodies, such as the

One important initial work product is publication, by the Coast Guard, of a draft “policy letter” describing “type- approval testing methods and protocols for ballast water management systems.” This draft will address nonviability of organisms in ballast water as well as system performance and laboratory certi? cation.

This is critical work. The draft letter was due 180 days after VIDA’s enactment – around June 4. The document is late: still unavailable by mid-June. Stakeholders should watch for its release because that starts a 60-day public com- ment period. Issues needing evaluation include how the draft aligns (or not) with IMO (International Maritime Or- ganization) requirements. Other issues could reference UV ef? cacy and veri? cation, and use, of “most probable num- ber” analyses referencing phytoplankton and other biota.

The letter will include EPA’s test protocols and new standards. For ballast water, it will serve as the basis for a ? nal policy regarding “type-approved” treatment systems, which needs to be in place one year after VIDA’s enact- ment, or December 2019. Brady adds, “Systems already type-approved by the Coast Guard will retain their approv- al. We do not expect to address the status of or include a discussion on existing systems in the policy letter.”

Although there is no date for its start-up, another impor- tant VIDA requirement is establishment of an “Intergov- ernmental Response Framework” to respond to nuisance species risks from ballast water and vessel discharges. This www.marinelink.com