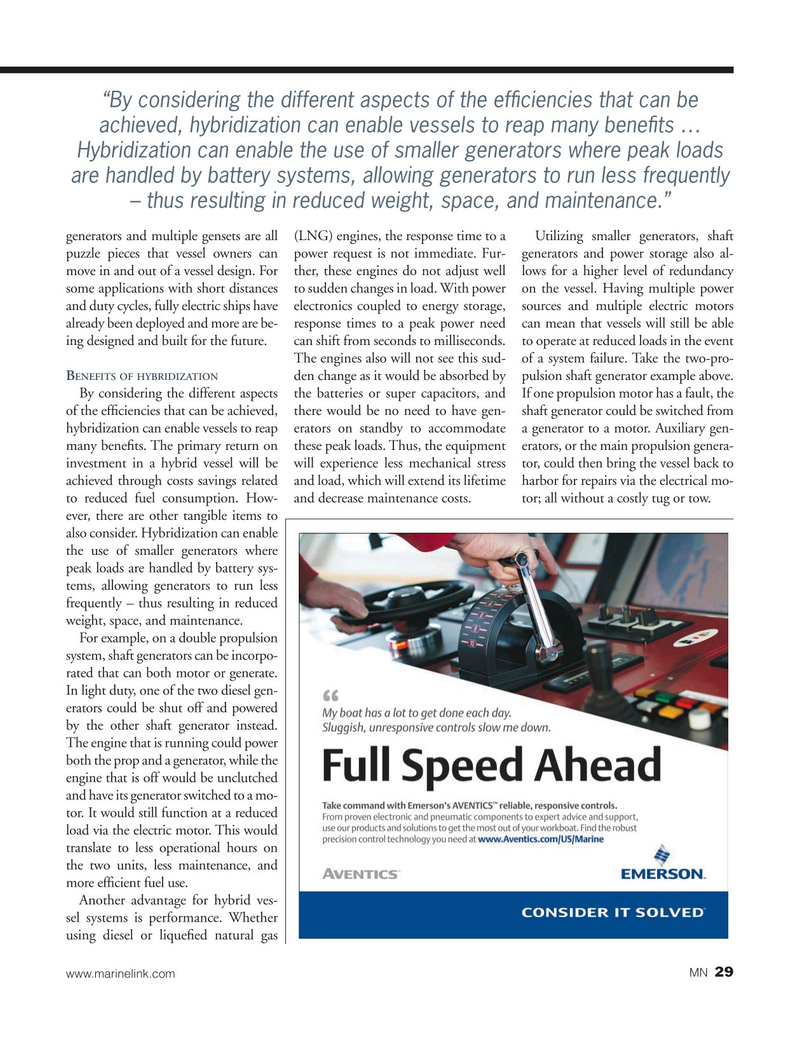 “By considering the different aspects of the ef? ciencies that can be achieved, hybridization can enable vessels to reap many bene? ts …

Hybridization can enable the use of smaller generators where peak loads are handled by battery systems, allowing generators to run less frequently – thus resulting in reduced weight, space, and maintenance.” generators and multiple gensets are all (LNG) engines, the response time to a Utilizing smaller generators, shaft puzzle pieces that vessel owners can power request is not immediate. Fur- generators and power storage also al- move in and out of a vessel design. For ther, these engines do not adjust well lows for a higher level of redundancy some applications with short distances to sudden changes in load. With power on the vessel. Having multiple power and duty cycles, fully electric ships have electronics coupled to energy storage, sources and multiple electric motors already been deployed and more are be- response times to a peak power need can mean that vessels will still be able ing designed and built for the future. can shift from seconds to milliseconds. to operate at reduced loads in the event

The engines also will not see this sud- of a system failure. Take the two-pro-

B den change as it would be absorbed by pulsion shaft generator example above.

By considering the different aspects the batteries or super capacitors, and If one propulsion motor has a fault, the of the ef? ciencies that can be achieved, there would be no need to have gen- shaft generator could be switched from hybridization can enable vessels to reap erators on standby to accommodate a generator to a motor. Auxiliary gen- many bene? ts. The primary return on these peak loads. Thus, the equipment erators, or the main propulsion genera- investment in a hybrid vessel will be will experience less mechanical stress tor, could then bring the vessel back to achieved through costs savings related and load, which will extend its lifetime harbor for repairs via the electrical mo- to reduced fuel consumption. How- and decrease maintenance costs. tor; all without a costly tug or tow. ever, there are other tangible items to also consider. Hybridization can enable the use of smaller generators where peak loads are handled by battery sys- tems, allowing generators to run less frequently – thus resulting in reduced weight, space, and maintenance.

For example, on a double propulsion system, shaft generators can be incorpo- rated that can both motor or generate.

In light duty, one of the two diesel gen- erators could be shut off and powered by the other shaft generator instead.

The engine that is running could power both the prop and a generator, while the engine that is off would be unclutched and have its generator switched to a mo- tor. It would still function at a reduced load via the electric motor. This would translate to less operational hours on the two units, less maintenance, and more ef? cient fuel use.