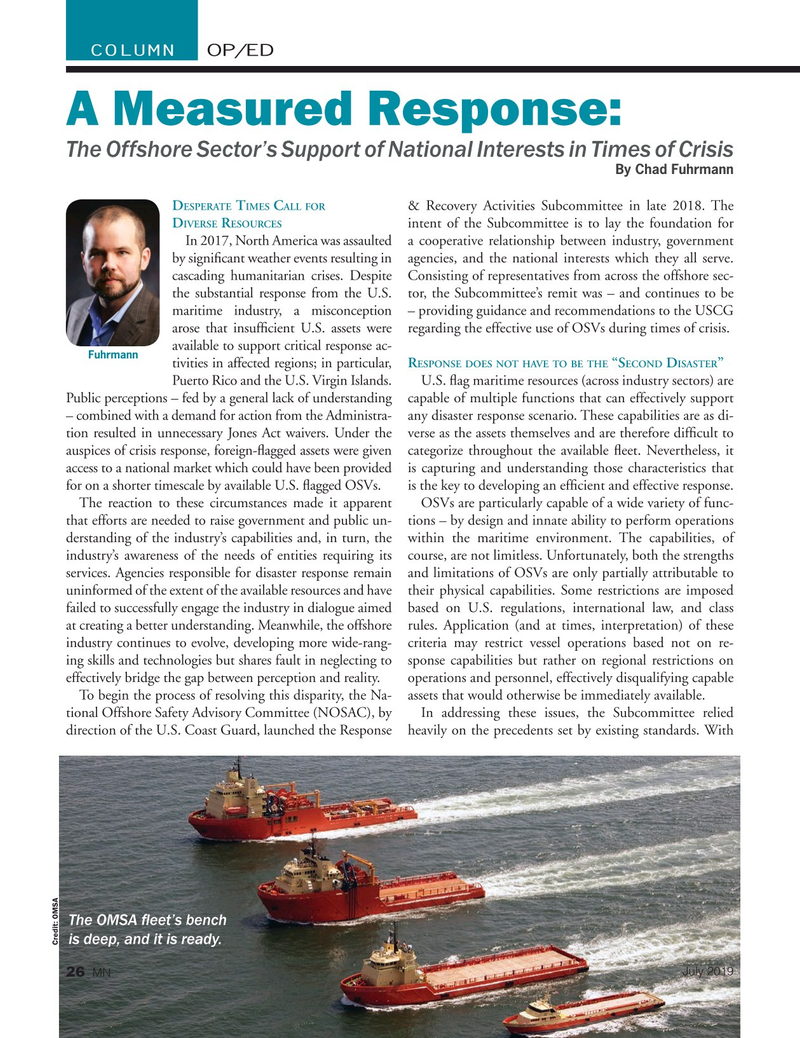 In 2017, North America was assaulted a cooperative relationship between industry, government by signi? cant weather events resulting in agencies, and the national interests which they all serve. cascading humanitarian crises. Despite Consisting of representatives from across the offshore sec- the substantial response from the U.S. tor, the Subcommittee’s remit was – and continues to be maritime industry, a misconception – providing guidance and recommendations to the USCG arose that insuf? cient U.S. assets were regarding the effective use of OSVs during times of crisis.

ESPONSE DOES NOT HAVE TO BE THE ECOND ISASTER tivities in affected regions; in particular, R “S D ”

Public perceptions – fed by a general lack of understanding capable of multiple functions that can effectively support – combined with a demand for action from the Administra- any disaster response scenario. These capabilities are as di- tion resulted in unnecessary Jones Act waivers. Under the verse as the assets themselves and are therefore dif? cult to auspices of crisis response, foreign-? agged assets were given categorize throughout the available ? eet. Nevertheless, it access to a national market which could have been provided is capturing and understanding those characteristics that for on a shorter timescale by available U.S. ? agged OSVs. is the key to developing an ef? cient and effective response.

The reaction to these circumstances made it apparent OSVs are particularly capable of a wide variety of func- that efforts are needed to raise government and public un- tions – by design and innate ability to perform operations derstanding of the industry’s capabilities and, in turn, the within the maritime environment. The capabilities, of industry’s awareness of the needs of entities requiring its course, are not limitless. Unfortunately, both the strengths services. Agencies responsible for disaster response remain and limitations of OSVs are only partially attributable to uninformed of the extent of the available resources and have their physical capabilities. Some restrictions are imposed failed to successfully engage the industry in dialogue aimed based on U.S. regulations, international law, and class at creating a better understanding. Meanwhile, the offshore rules. Application (and at times, interpretation) of these industry continues to evolve, developing more wide-rang- criteria may restrict vessel operations based not on re- ing skills and technologies but shares fault in neglecting to sponse capabilities but rather on regional restrictions on effectively bridge the gap between perception and reality. operations and personnel, effectively disqualifying capable

To begin the process of resolving this disparity, the Na- assets that would otherwise be immediately available.

tional Offshore Safety Advisory Committee (NOSAC), by In addressing these issues, the Subcommittee relied direction of the U.S. Coast Guard, launched the Response heavily on the precedents set by existing standards. With

The OMSA ? eet’s bench is deep, and it is ready.