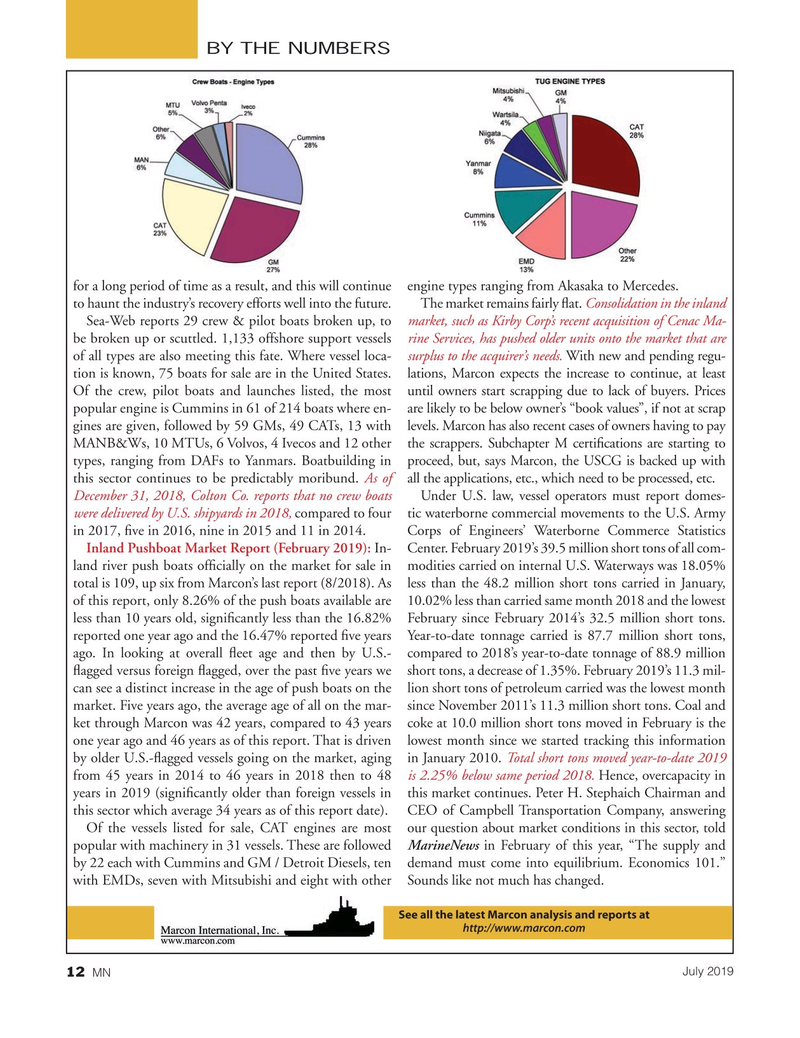 BY THE NUMBERS for a long period of time as a result, and this will continue engine types ranging from Akasaka to Mercedes.

to haunt the industry’s recovery efforts well into the future. The market remains fairly ? at. Consolidation in the inland

Sea-Web reports 29 crew & pilot boats broken up, to market, such as Kirby Corp’s recent acquisition of Cenac Ma- be broken up or scuttled. 1,133 offshore support vessels rine Services, has pushed older units onto the market that are of all types are also meeting this fate. Where vessel loca- surplus to the acquirer’s needs. With new and pending regu- tion is known, 75 boats for sale are in the United States. lations, Marcon expects the increase to continue, at least

Of the crew, pilot boats and launches listed, the most until owners start scrapping due to lack of buyers. Prices popular engine is Cummins in 61 of 214 boats where en- are likely to be below owner’s “book values”, if not at scrap gines are given, followed by 59 GMs, 49 CATs, 13 with levels. Marcon has also recent cases of owners having to pay

MANB&Ws, 10 MTUs, 6 Volvos, 4 Ivecos and 12 other the scrappers. Subchapter M certi? cations are starting to types, ranging from DAFs to Yanmars. Boatbuilding in proceed, but, says Marcon, the USCG is backed up with this sector continues to be predictably moribund. As of all the applications, etc., which need to be processed, etc.

Inland Pushboat Market Report (February 2019): In- Center. February 2019’s 39.5 million short tons of all com- land river push boats of? cially on the market for sale in modities carried on internal U.S. Waterways was 18.05% total is 109, up six from Marcon’s last report (8/2018). As less than the 48.2 million short tons carried in January, of this report, only 8.26% of the push boats available are 10.02% less than carried same month 2018 and the lowest less than 10 years old, signi? cantly less than the 16.82% February since February 2014’s 32.5 million short tons. reported one year ago and the 16.47% reported ? ve years Year-to-date tonnage carried is 87.7 million short tons, ago. In looking at overall ? eet age and then by U.S.- compared to 2018’s year-to-date tonnage of 88.9 million ? agged versus foreign ? agged, over the past ? ve years we short tons, a decrease of 1.35%. February 2019’s 11.3 mil- can see a distinct increase in the age of push boats on the lion short tons of petroleum carried was the lowest month market. Five years ago, the average age of all on the mar- since November 2011’s 11.3 million short tons. Coal and ket through Marcon was 42 years, compared to 43 years coke at 10.0 million short tons moved in February is the one year ago and 46 years as of this report. That is driven lowest month since we started tracking this information by older U.S.-? agged vessels going on the market, aging in January 2010. Total short tons moved year-to-date 2019 from 45 years in 2014 to 46 years in 2018 then to 48 is 2.25% below same period 2018. Hence, overcapacity in years in 2019 (signi? cantly older than foreign vessels in this market continues. Peter H. Stephaich Chairman and this sector which average 34 years as of this report date). CEO of Campbell Transportation Company, answering

Of the vessels listed for sale, CAT engines are most our question about market conditions in this sector, told popular with machinery in 31 vessels. These are followed MarineNews in February of this year, “The supply and by 22 each with Cummins and GM / Detroit Diesels, ten demand must come into equilibrium. Economics 101.” with EMDs, seven with Mitsubishi and eight with other Sounds like not much has changed.

See all the latest Marcon analysis and reports at http://www.marcon.com